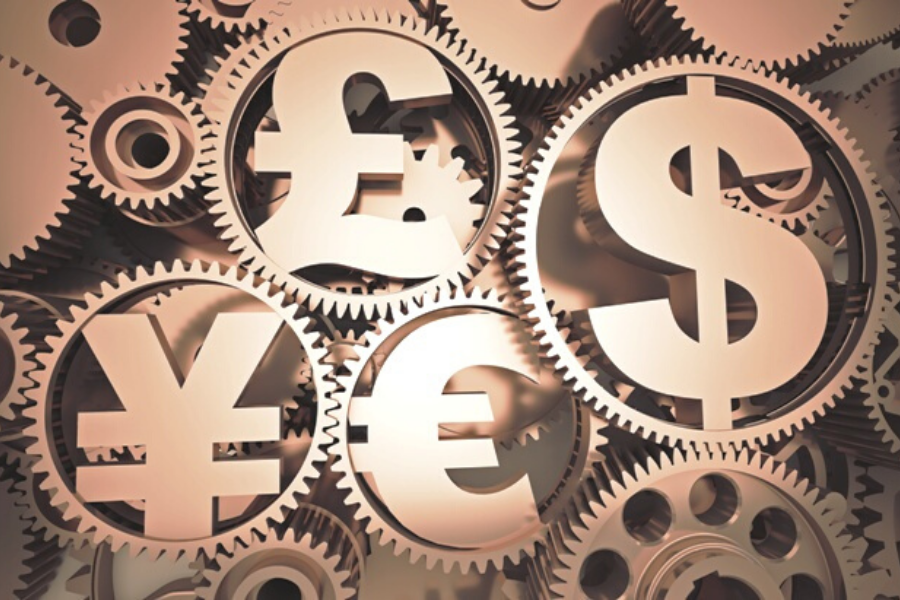 With so much turmoil and heartbreak the past month it felt rather inappropriate to be writing about the state of something as mundane as the IP Marketplace. Indeed, in only a matter of weeks, we went from feeling giddy at the thought of the world cautiously reopening, to being acutely reminded that there are still systemic racial and social wounds that have yet to heal, especially here in the US. As new Covid infections soar in the US, we are finally coming to realize that our attempts to return to some semblance of normality as soon as possible, were quite premature and rather ill-advised. This virus is now making us pay dearly for having underestimated it. Who wants to hear about patents in the midst of all this?

If we provide some context though, the health of our patent ecosystem does still matter; for instance, our leaders and the policies they enact, now more than ever, must be driven by good science. Failure to do so directly results in deaths as we have witnessed, and the stark contrast between science driven economies and those that are not is laid bare for everyone to see.

As most already know, the work product of good science is innovation and the best objective metric to value innovation remains the patents that are filed as a result. Thus, if patents have no perceived value, then the urge to innovate vanishes, good science gradually falters, and it is then replaced by a myriad of unproven theories. Ring a bell?

So, it does make sense after all to focus on and care about the underlying value of IP, as it is directly connected to our long-term pace of innovation and the resulting strength of our economy and public health. So now that we have come full circle, and with the hope that this column may still bear relevance for some of you, let’s look at a few notable events that happened in “our” world.

In the meantime, stay safe and keep others safe by wearing a mask!

US Patent Lawsuits Trending Up & the Rise of the Mega NPEs

We have clearly entered bear territory despite the stock market’s best efforts to prove otherwise. And as happened last time we had a recession, patent law suits are now trending up in the US and elsewhere. This is no surprise as patents are generally seen as recession-proof assets. NPEs are accelerating their acquisitions, most of the time on a low risk hybrid-based model that is primarily structured as a revenue sharing model with the previous owner. More on this later.

Among a sea of newcomers, one new phenomenon worth mentioning is the gradual emergence, of what some have dubbed the “Mega NPEs”. In this category, two names stand out: Fortress Investment Group, who just acquired one of the very few rather successful publicly traded IP company, Finjan Holdings, Inc. for a reported $44M (which apparently included $30+M in cash reserves) and Acacia Research. A reinvigorated Acacia Research (who is taking cues from investor and activist board member Starboard) recently snagged beleaguered investment firm Woodford’s 19 biotech patents for $284M. This comes on the heels of another giant acquisition of a large chunk of the former Yahoo patent portfolio for another $300M. This is more than a half billion dollars spent on patents in a matter of a few months. Both Fortress and Acacia have been very active litigants this past year, to a point where Apple and Intel felt compelled to file an antitrust suit against Fortress on the basis that stockpiling patents and bringing lawsuits against alleged infringers was anti-competitive. After the DOJ sided with Fortress, a judge recently questioned the soundness of such complaint.

In a sense, these two deep-pocketed NPEs understand that you can only fight fire with fire, and they have taken the gloves off. This is unlike the model that Intellectual Ventures (see below) was trying to pursue in the past decade when it aggregated large number of patents in some specific technology silos, thinking it would be sufficient for people to buy in their volume licensing model without having to assert their patents except in the rarest occasions. When it did not work, they were left with tens of thousands of patents that they are still selling off.

Our good friends at Allied Security Trust (AST) were kind enough to share with us an internal report showing patent buying activity in the last 2 years and the following are highlights from said report. The data is quite interesting and confirms what we have been seeing and saying for a certain time; while large operating companies (in black in the table) have largely vacated the patent acquisition market as a way to build their portfolio, they still favor opportunistic acquisitions and you will still see transactions being reported below. One caveat though; the data is based on recorded patent assignments which could have been transferred in the context of an M&A deal where patents might come along for the ride with other assets and people. Nonetheless and while we are still a far cry from 5 to 10 years ago when many Fortune 500 were still gobbling up patents ferociously, it is heartening to see that level of activity between OpCos.

But without a doubt NPEs (in red in the table) are the ones taking the relay, although Intellectual Ventures (just 1 acquisition in 2019, down from 9 in 2018) has reversed courses from being an active buyer to one of the most active seller of patents. This trend accelerated in Q1 of 2020 with IV’s sale of over 3000 patent assets to US-based firm IPInvestment Group (IPIG), which has become a major player almost overnight with such a large purchase. Although there were several transactions involving both parties, most assets were transferred in one large deal involving a subsidiary of IPIG vehicle called Hanger Solutions, Inc. 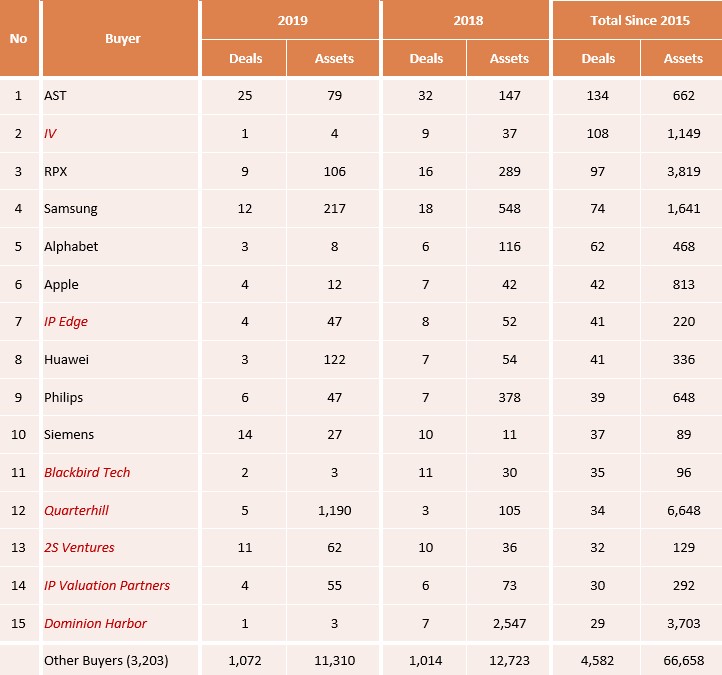 This report shows that AST was actually the most prolific buyer in 2018 and 2019, and I take the opportunity to correct what I wrote in my previous column as I mistakenly referred to the IP3 program when I should have been referring to another program (called Bin 2020) that had just closed. (Incidentally, AST just recently announced the 5th edition of its IP3 “no haggling” patent purchase program which just started on July 6th.)

In the first quarter of 2020, there were 340 deals involving 6,525 assets, 305 sellers, and 303 buyers. Electronics and Communications were the leading categories in the secondary patent market during Q1, accounting for more than 50 percent of the transacted assets. Sales by IV accounted for 54% of those deals, while 33 new NPEs bought assets in this quarter. Liberty Patents LLC, K.Mizra LLC, ImberaTek LLC, Sonrai Memory Ltd, Freede Solutions Inc. and Micropairing Technologies Ltd., to name a few, were involved in large transactions based on the number of assets. But some NPEs have also followed in the footsteps of IV and become sellers themselves; Daedalus Group and Inception Holdings sold 67 and 56 assets, respectively.  Brian Yates’s IPEL fund which focuses its assets and related assertion activities in China, was also reported selling some assets to K. Mizra LLC. a new NPE.

For those who are interested in what kind of patents transact most often, the graph below will be quite helpful and it is quite interesting to note that some areas such as pharma are very active in what looks like the transfer of very small portfolios whereas buyers in others, like electronics and communications related patents, appear to find some safety in large numbers of assets per deal.

The foregoing provides a great view of the past and current situation, reveals some less public players in the space and it is overall consistent with our previous observations and corresponding  guidance, which you can see in previous columns.