What About My Freedom? 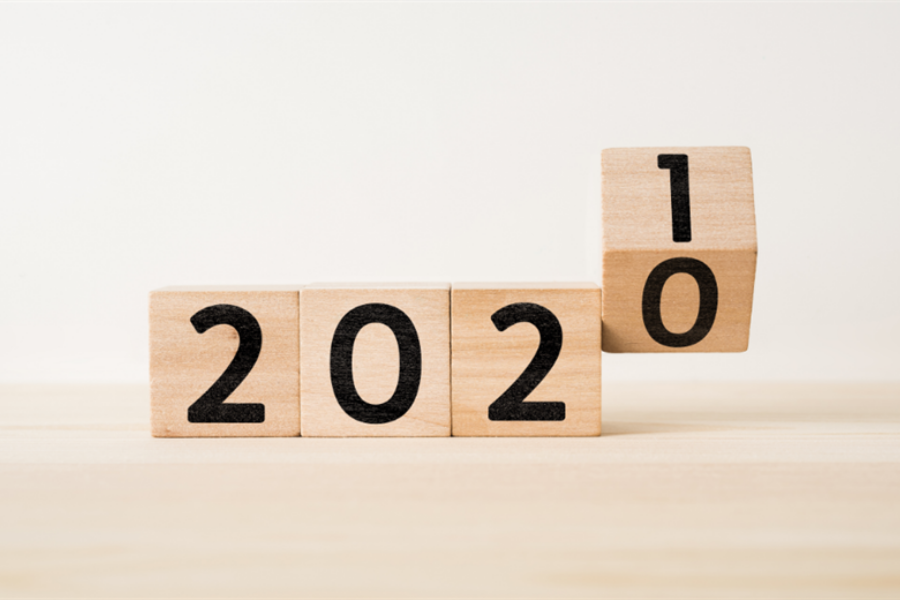 As we all recognize by now, 2021 did not exactly start like the world had hoped, to say the least. Two parallel pandemics in health and politics are spinning out of control. This is a stark and sober reminder that the forces that contributed to (or worsened) a lot of our predicaments last year did not simply disappear because we flipped a page on our calendar. Needless to say, and in light of recent events, I’d rather write some editorial content about current events that I strongly feel about; but I have read so many opinion pieces in the past few days from people who are much more versed in politics and policy than I am, that I do not believe my own ramblings would add anything of value and so I will refrain from belaboring this painful topic. But I will state the obvious; that one cannot but feel pain to one’s core if you live in the US and you see the great damage done to this country, irrespective of which side you are on.

Let’s just us hope that cool heads will prevail rather than roll.

No great way to transition here, but back to business. In Tangible IP news, we just announced a few days ago that we successfully brokered multiple voluntary licenses on a patent portfolio from a startup pertaining to wireless payments, which is still available for sale. Click here for details on the transaction. We will have a few additional deals to announce in the coming weeks as they are in the final stages of closing.

I normally take this space to share my take on the IP market, mostly from a business standpoint. Today is a little bit of an exception. But before we treat our main topic, there was a major story reported earlier this week that defensive aggregator RPX licensed some 18,000 patents from former IP behemoth Intellectual Ventures (IV), apparently for a sum in the low nine figures.

As a result of that transaction, all RPX members (estimated between 300 and 400) should automatically be licensed to that portfolio from now on, which will nip in the bud a fair amount of potential patent litigation. From a market standpoint, this is actually good for a few reasons; first, it shows that RPX, one of the most sophisticated shops when it comes to valuing patent risk, still sees significant defensive value in the right assets; second, it provides a valuable comparable for other licensors, with the caveat that each portfolio is rather unique and this one is likely a hodgepodge of many unrelated assets; finally, it neutralizes a large body of patents that IV would have otherwise shopped around and sold for pennies on the dollar upfront to an NPE, as many past transactions suggest. While this still may happen since RPX only took a license to the portfolio after all, it will be at a much smaller scale given that most Fortune 500 are now licensed. As such, it also helps reduce the extra inventory of patents gutting the market (many of which have come from IV) and contributes to rebalancing supply and demand, which in turn should help keeping valuations up as they have in the past year. In short, we see this as a slight positive for patent valuations.

Of Freedom (To Operate)

When he was not snacking on other boxers’ ears, Mike Tyson is famous for having said that “everyone has a game plan, until they get punched in the face.” This could not be more accurate when it comes to startups and SMEs and their IP strategy (or absence thereof).

When I consult or present on IP Strategies, I often use the pyramid below to show how the value chain of IP Strategy works. (I did not create it, by the way, but cannot recall where I found it). 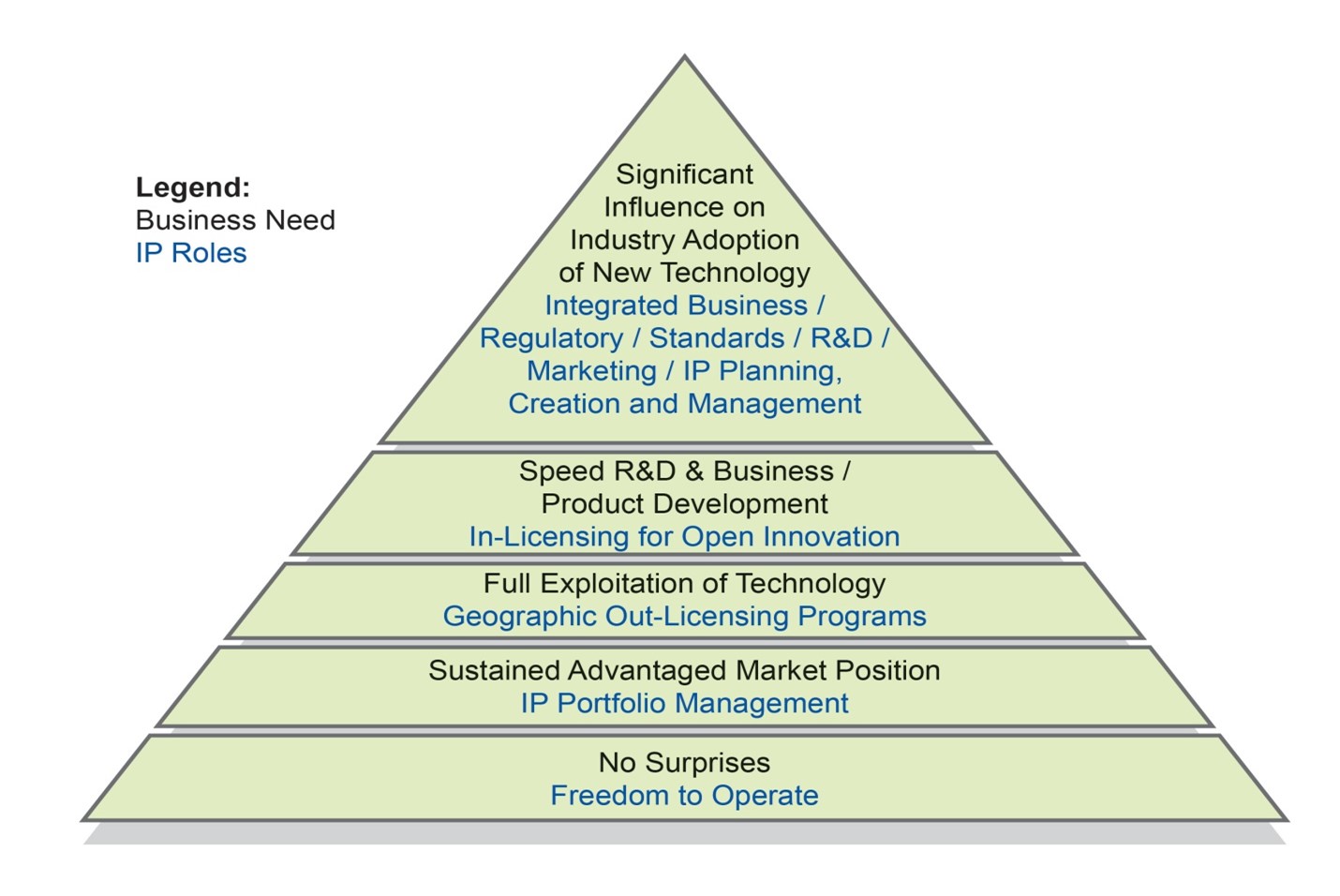 Startups are generally not even at the first level while large, sophisticated companies (think GAFA) are at the top. If this were a video game, you could not access the second level before you reached the state of “No surprises” aka Freedom to Operate (FTO). One should view an FTO as akin to proper regulatory approval for a new drug or the permitting for a new house. However, the reality is, many companies are still stuck at this first level as they have the wrong assumptions. Indeed, most execs I talk to still believe that because they have filed patent(s) of their own, it shields them from possible lawsuits by potential third party patent owners. If this were true, most large companies who own tens of thousands of patents and file thousands more each year would never be sued, whereas they are by a large extent the most common defendants in patent litigation. Apple for one has been sued roughly 30 times by patent owners in the past year alone. The fact that they own thousands of patents on the iPhone does not change the fact that a typical iPhone practices on average about 250,000 patents, based on studies that were made public a few years back. But Apple and most other Fortune 500 companies can afford the best law firms and have enough cash on reserve to fend off any litigation that might come their way. $1B damages award? Not a problem when you have $200B in the bank.

On the other end of the spectrum, most smaller companies do not have the luxury of surviving the receiving end of even a single patent infringement lawsuit. Those are existential threats since the reality is that patent litigation in the U.S. (and there are about 6000 new ones per year in the US alone) costs $5M on average and very few businesses can sustain the costs and the uncertainty during the years of litigation, even if they might be right at the end. Therefore, it is paramount to understand if your business is already or might be infringing the intellectual property of a third party, whether a competitor or a Non-Practicing Entity (NPE). Doing a thorough FTO is the only way to answer the question: “Am I infringing someone else’s patent?”

Rarely is anyone looking to invest in a potential lawsuit. So, if you are a potential investor in a company, would you not want to know of such risk BEFORE you write a large check? We have conducted numerous FTO projects these past years for companies, VCs, and investors at large who sought better risk assessment before closing on a deal. Doing it right requires a brute force exercise as each time our technical team must comb through well over 1000 patents before we can narrow those down to the most relevant ones (you can see a sample report here). When we find patents that may be problematic, the clients still have several options, precisely because they did this work before a given patent owner was alerted to potential infringement. The options available can include, making a small design change early on, explore licensing or acquiring the patent(s) in question before they become an obstacle, or alternatively they may simply determine that the patent in question will likely not sustain a validity challenge, and take a calculated risk by staying the course. Either way, information is key, solutions abound early on and taking the proper path is generally much cheaper than if one waits until it has been served with a complaint.

I strongly encourage companies in 2021 to ask themselves these questions and to take care of addressing a real business risk, preferably before they get punched in the face…