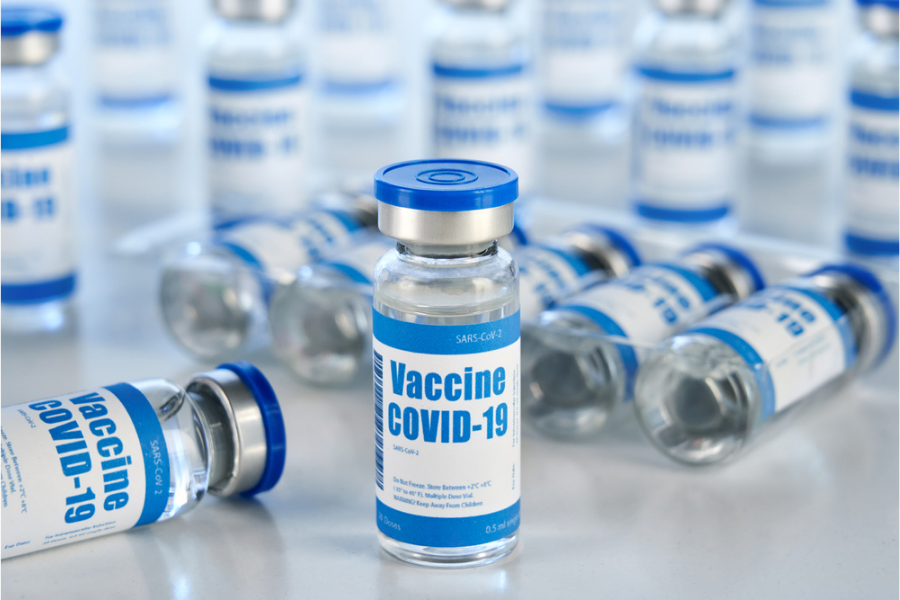 Here in the US, the outlook is pretty positive these days. And, I must say, I took for granted the simple joy of a hug. For the more adventurous types, travel is slowly resuming with trips and conferences on the horizon. However, this is a stark contrast to many other countries still living with the same set of restrictions we recently shed; a burden no longer shared. This dichotomy between countries where the vaccination rate is higher and others who are not as fortunate has triggered renewed claims from emerging countries to waive IP rights related to the vaccine.

Meanwhile in the US, we witness the same efforts that take place with every new administration where the camp wanting stronger patent rights and those who prefer a weaker protection scheme are jockeying to gain strategic advantage while there is still a vacuum at the helm of the USPTO. This has led to yet another draft bill in Congress that inventors are not so happy about.

Finally, we seem to be back to a patent assertion environment that looks strikingly like the one that prevailed a few years back before the Supreme Court decision in TC Hartland dealt away with the then prevalent forum shopping and with a lot more money available to fund patent owners. And the big winner is? More on these topics below.

Just a few weeks ago, we announced the sale of a larger portfolio originating from Nokia and pertaining to video codecs. We also currently have a few transactions in closing that we will announce in due time.

Still in the video codec area, we have just been retained exclusively by RealNetworks to divest a sizable group of high-quality assets regarding their latest generation media player (RealMediaHD), which will be made available to our network of buyers in the next few weeks. Furthermore, we have just been retained exclusively by Nokia to sell a great portfolio of location-based services patents which is very relevant to a number of tech sectors including, ridesharing, automotive, etc. We will also share more details in due course. Stay tuned.

Finally, we are pleased to share that Tangible IP has been retained exclusively by Allied Security Trust (AST) – a consortium of 40+ of the largest companies in the world – to divest almost 30 lots it acquired during its 2020 IP3 program. These portfolios represent the cream of the crop among 1300 portfolios that were submitted to AST during that program. We will publish more details about those as well shortly.

As we indicated in our last issue, we are letting our readers know the areas where we have buyers willing and ready to acquire patents. Our VP Brokerage, Erika Warner is the point of contact for those. You can also reach her at info@tangibleip.biz.

Digital Advertising – evidence of use is required.

NOTES: a minimum of 3 years of life and EOU where noted is required

Each time a large effort like the one to find and develop a vaccine for COVID-19 is underway, people celebrate the financial and legal (i.e. proper IP protection) incentives that are in place for companies to embark on such a risky adventure. Indeed, companies allocated countless resources in an effort to deliver results, and hopefully a  healthy return on what is a massive and very uncertain investment.

With COVID, these companies sure did deliver, with several of them bringing a very efficient and safe vaccine to market within months instead of the usual years. Note that we only hear about the successful ones; a few other also spent the same billions of dollars trying, but they ultimately failed to develop an efficient vaccine and now face a huge write-off for 2020. But they still took on that huge risk because they knew that if they got it right, it would be worth it. At least they assumed so…

Naturally, now that we have a solution, everyone wants it, and they want it cheap too, thus collapsing the very business model that supported its development in the first place. We have seen clamors from across the world these past weeks for pharmaceutical companies to waive their rights on patents related to their respective vaccine. The Biden administration has publicly supported this request, likely because it knows very well that it would be a mostly symbolic gesture; these patents don’t even exist yet (as it takes years from filing to obtain one), meaning they are still pending, and generic pharma knows that reading a patent does not make a company a vaccine producer overnight; they also require access to a ton of confidential data and knowhow transfer before someone can replicate the same results. These drugs then need to be approved by the various regulatory authorities after proper clinical trials. This is why the EU did not take Biden’s pledge too seriously and quickly called it insufficient when it was announced.

This is an interesting debate, with serious arguments to be made on both sides. Like most people, I have a love/hate relationship with big pharma and believe that too often they gouge customers who have no choice other than to buy the drugs they rely on for their survival. However, and without oversimplifying the current debate, the fight around a patent rights waiver for the vaccine is largely a red herring in my view; the real debate is about availability given current production capacity, distribution (should every American baby be vaccinated before a dose is sent to vulnerable elderlies in emerging countries?) and pricing.

This last aspect is probably the easiest to deal with, as governments around the world are both buyers and regulators at the same time. They have leverage to negotiate better prices, they can afford to borrow on public markets and run massive deficits in order to save lives, and they can also rely on compulsory licensing schemes present in most countries, if need be, to start or accelerate local production. Ultimately, the forces of supply and demand dictate most of the interactions here and we are already seeing some saturation in the vaccination rate in more affluent markets, increased production capacity across the globe and millions of doses sent in countries/regions in need through COVAX. Thus, and while the situation is far from perfect, the system has worked for the most part and the “rights” incentives from the start have delivered not one, but several solutions in record time. Let’s not forget this before moving the goal posts as otherwise, when the next pandemic takes place, there may be very few players left to find a solution.

In the US, there is still a void left by the change of guard at the USPTO as the current acting director is essentially a caretaker while we await the nomination of a new commissioner to replace the influential Andrei Iancu who was at the helm during the last 4 years. Everyone is trying to read the tea leaves by scrutinizing the roster of candidates being leaked to the press in order to determine whether the “pro” patent (i.e. the inventors’ lobby) or “anti” patent (i.e. Big Tech) forces will get their choice. At least one candidate that was associated with Big Tech has found another position in the administration, so this leaves a few candidates both liked and disliked, depending on your views. Stay tuned. Meanwhile, those representing inventors and patent owners are voicing their concerns over a suggested amendment to what is a rather rare bipartisan draft bill in Congress called the Endless Frontier Act, a bill that work to establish U.S. dominance in crucial areas of basic research including artificial intelligence, high-performance computing and advanced manufacturing. It also represents a bipartisan effort to address China’s ambitions to become a globally dominant technological power, which is long overdue. However, an amendment (one of 215) to the proposed bill by Sen Patrick Leahy (D) and Thom Tillis (R) would create a series of statutes related to ex parte reexamination proceedings within the USPTO such that a party challenging patent claims can assert that particular patent claims should be unenforceable due to inequitable conduct. This may seem fairly trivial to the uninitiated; but remember that when the America Invents Act introduced IPRs several years ago, very few people could have predicted that it would become such a powerful tool to invalidate patents.

Nonetheless, some of the worst excess of the PTAB appear to have subsided in the past couple of years and, when talking to litigators, they do not seem to fear the IPR route as much as they did only a few years ago, especially if they have the ability to initiate a patent law suit in Texas. Which brings us to our last topic.

Back to the Wild West

I remember from my days at Microsoft fifteen or so years ago where the company was on the receiving end of about 40 active patent litigations year after year. No matter how many cases it settled along the way, others would sprout. Interestingly, 90% of these cases were from NPEs and virtually all of them were introduced in the Eastern District of Texas where judge Gilstrap had established the famous “rocket docket” (i.e. a very short time to trial) and the city of Longview, TX seemed to teem with patent friendly jurors.

Fast forward to a couple of years ago, the US Supreme Court had nearly killed the great State of Texas as the venue of choice for patent owners, as it did away with forum shopping with its decision in the T.C. Hartland case in 2018. After that, you pretty much had to sue a company in the district it was headquartered or where it had substantial commercial activities. Since not many were based in Longview, a quiet city of 80,000 souls located 130 miles east of Dallas, most cases had to be filed elsewhere and, in many cases, ended up in Delaware where so many companies are incorporated. Even Apple famously closed 2 of its Apple stores in the eastern District of Texas rather than faring another lawsuit there. Talk about the tail wagging the dog.

Then came the appointment by then President Trump of Judge Alan Albright at the end of 2018 for the Western District of Texas. Judge Albright is a former patent litigator at a large national firm. Unlike his colleague from the Eastern District, Judge Albright also has the good fortune of presiding over a judicial district that includes cities such as Austin, San Antonio and Waco, to name the 3 largest.  Austin is a large and fast-growing tech hub in its own right where most of the big technology companies have a massive presence and where closing shop is simply not in the cards. As a result, and because of Judge Albright’s declared agenda to welcome patent cases and move them fast, Texas is back in full swing as the venue of choice for plaintiffs. Add to this that Albright will simply not entertain most preliminary motions (the dreaded 101 -abstract idea-challenge) and will not stay a case just because the defendant concurrently filed an Inter Partes Review with the PTAB, and you quickly understand why we are now back to a situation that resembles a lot the Wild West of patent litigation from the 1990’s, thus providing a sliver of hope to patent owners who had lost faith in the courts’ ability to vindicate their claims.