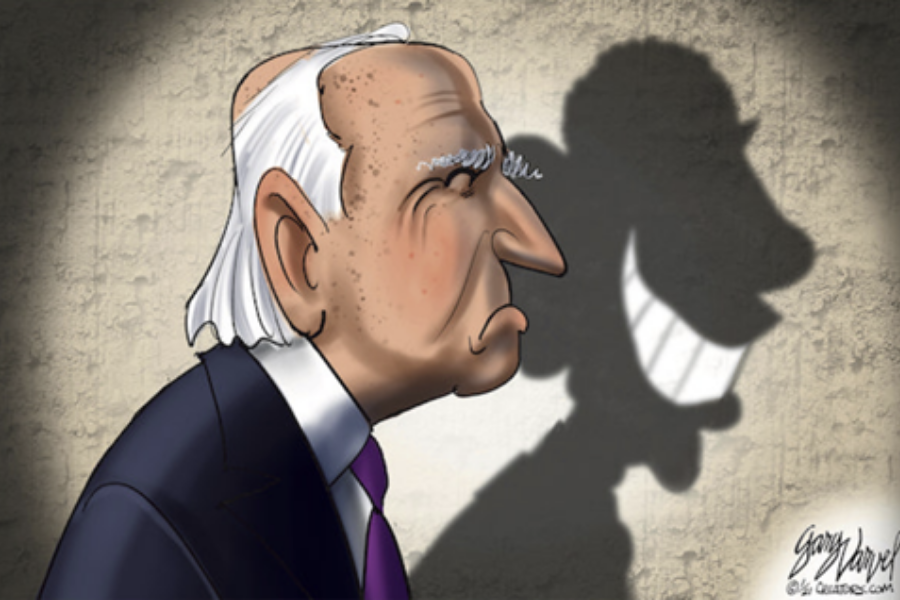 Last weekend, I watched “ The Billion Dollar Code,” a 4-episode fictionalized series based on a true story. The series recounted the lawsuit brought forth by a small German startup (Art+Com) in 2014 against Google for infringing their patent. This patent was the foundation of their Terravision software and, a decade later, Google’s ubiquitous Google Earth. I won’t spoil the story by revealing how it ends, but suffice to say, it’s worth watching. At some point, I couldn’t help but cringe when the actor portraying the Google German attorney meets with the two young cofounders and tells them flatly: “It is not because the USPTO granted you a patent that it makes it valid.” Sometimes, fiction is really in lock step with reality…

Which brings us to OUR new reality; we are now starting to see more clearly the imprint that the – not so – new Biden administration is leaving on the intellectual property world and, if you are a patent owner, it is far from encouraging. Indeed, there have been a series of legislative moves reminiscent of the environment that prevailed under the Obama administration, which culminated yesterday with the announcement that a Silicon Valley veteran patent litigator, whose past clients apparently include Apple and Microsoft among others, has been nominated to be the next USPTO director. More analysis on these recent events below.

In the last weeks, we successfully brokered several voluntary licenses with Fortune 500 companies, including licenses on a portfolio originating from Xerox which had been actively litigated in the past. We were able to convince the current owner to pause their campaign while we negotiated and managed to close these licenses with three companies. These are 3 potential lawsuits that will never need to be filed as a result… You are welcome! 😉 You can see the full press release here.

We also closed two new licenses on a portfolio pertaining to cloud computing, and one more on another portfolio directed to touch screen security displays. Look for a more detailed announcement shortly.

For patent owners and NPEs alike who may want to explore this monetization model prior to (or in parallel to their assertion activities), please contact us directly.

Finally, on the advisory side we recently completed several interesting projects, including a few landscape studies, portfolio reviews and analysis, patentability assessments and evidence of use searches for numerous clients. In short, we are busy hence this newsletter is a little outside our monthly cadence. Clients always come first!

We also have a buyer with interest in wireless charging assets as those relate to phones/tablets/laptops.

As our readers know, I regularly return to the following 5 distinct criteria that have been fairly reliable predictors over the years of the market health and direction. Those are:

Today, I will focus on the regulatory, or legislative front, and while there were some recent cases from the Appeals Court that addressed important matters that could have been game changers (like the inherent bias of the PTAB), their decisions essentially maintained the status quo.

Remember the America Invents Act (aka AIA)? That law, voted in by President Obama on September 16, 2011, has been responsible for global heartburn ever since. Many of us have long forgotten that the real name of the law was actually the “Leahy-Smith America Invents Act,” for its two main co-sponsors Senators, Patrick Leahy (D) and Lamar Smith (R) who, at that time, were respectively the Chairman and the ranking member of the powerful US Senate Judiciary Committee that oversees IP related matters (there were seven other co-sponsors to be accurate).

Under the Trump administration between 2016 and 2020, the roles were reversed, and Senator Thom Tillis (R) became the Committee Chairman, while his democratic colleague Senator Chris Coons became the ranking member. During their tenure, we saw several draft bills (none of which ever passed given the highly partisan nature of Congress), that were largely favorable to patentees’ rights and offered an array of proposed changes in an attempt to rebalance the current system, ranging from small tweaks to fundamental repositioning. The point is, they all trended in the same direction and offered a shield against further disequilibrium in the patent system that most observers agree tends to overwhelmingly favor those challenging patent rights to the detriment of those who hold such rights. Senators Coons and Tillis were refreshingly aligned and nonpartisan in taking a similar public stance on numerous occasions in favor of inventors’ rights.

Furthermore, a changing of the guard at the USPTO directorship in 2017 – as usually takes place with any new administration – brought a new sheriff to town, Director Andrei Iancu, who  imposed a definite pro patentee twist to his administration, especially at the PTAB level (although many still claim the changes were more cosmetic than substantive overall).

Under Director Iancu’s tenure, the PTO modified its guidelines around the burden of proof in an Inter Partes Review (IPR) to achieve more consistency with the same test used in front of courts. They enacted new prosecution guidelines toward patentable subject matter (aka 101 or Alice) which clearly helped inventors navigate the Alice steeplechase course, that is, until the Federal Circuit decided to go in a completely different direction. And, last but not least, they took the position not to initiate IPR petitions when the same issue is already in front of a court of law that is likely to adjudicate before the PTAB itself can (aka the Fintiv rule). These combined actions made a lot of sense to whomever supports a balanced system and gave many patent owners back their perennial “day in court” as they are entitled under the US Constitution.

But, as the saying goes, elections have consequences. Senator Leahy now has his gavel back. He also apparently still listens to the same lobbyists that were mostly supportive of his signature law 10 years ago. As such, we recently saw not one, but two draft bills regarding patent rights that, despite their rather surgical scope and procedural nature, reflect the Biden Administration’s slant on IP matters. Spoiler alert, it looks a lot like what we saw under President Obama.

The first bill that was introduced is called  Pride in Patent Ownership Act. Its main premise, which I am paraphrasing at best, is a little hard to believe. It goes like this: “If you obtain or acquire a patent, you should be proud of it, so proud that you want to tell the whole world; hence you should have no problems registering it. In the meantime, you should not be entitled to treble damages against an infringer.”… I am not joking. The talking points advanced to support the Bill raise a few good arguments in favor of transparency since companies acquiring patents are infamous for dragging their feet in assignment recordation, which prevents the new owner from being identified in the PTO assignment database. Unfortunately, the bill is completely one sided; a much bigger problem these days often stems from the impossibility to uncover who is the “real party of interest” behind a validity challenge to a patent before the PTAB. You would think that these two issues could be addressed at the same time, as arguably two faces of the same coin. However, the exclusion of any transparency for the “party of interest”  strongly suggests that whoever drafted the proposed bill here aligns with the same group currently benefiting from the lack of transparency at the PTAB level and are perhaps annoyed that others are taking advantage of a similar loophole elsewhere.

Personally, I’ve brokered the sale of enough patents (closing in on 5000 at last count) to know that even if you make recording compulsory within a timely manner for patents that change hands, which I am all for, a buyer needs only set up a new LLC in some exotic country and use that special purpose vehicle (SPV) to acquire and maintain title until it needs to do something with the patents. Many are already doing just this. In the meantime, the proposed bill would simply add yet another hurdle and additional costs to small patent owners, many of whom will not know about this extra requirement and will then be deprived from all the tools available under the law to deter infringers from willfully practicing their patents. Please someone tell me how this makes the US patent system better or fairer.

The second proposed Bill is even less subtle, and you really have to be in the trenches of the patent system to grasp its potential impact. Introduced rather pompously as the Restoring America Invents Act, it essentially aims at legislatively reversing the Fintiv rule referred to above. That rule gave patent owners a breather and limited the potential for inconsistent rulings on patent validity matters between the PTAB and the Courts. À qui profite le crime?, as we say in French. Well clearly here, those benefiting from this proposed reversal (which appears to fly in the face of the PTO rule-making authority) would be the same ones who were using the PTAB serially to kill issued patents before the jury could hear the same case, that was until Director Iancu changed the rule. In short, you can see the fingerprints of BigTech all over this bill… Ironically, the proposed bill leaves the next PTO director as the ultimate referee of whether an IPR petition should be instituted.

Which brings us to our last point; President Biden announced on Wednesday that he has nominated Mrs. Kathi Vidal as the next USPTO commissioner. Mrs. Vidal is a seasoned patent litigator practicing in Silicon Valley and is presently the managing partner of Winston & Strawn’s Silicon Valley Office, where she has been since 2017. Prior to that, she served with Fish & Richardson for 20 years before that as Global Head of Litigation. She has represented both patent owners and defendants accused of infringement. The fact that she was once recommended as a potential candidate for the U.S. Court of Appeals for the Federal Circuit by Judge Paul Michel, a definite advocate of strong patent rights, is reassuring. Her technical credentials are also stellar, with degrees in mathematical physics, programming, and electrical engineering. She would be only the second woman in 200 years to lead the PTO, after Michelle Lee. So, on paper, she appears perfect for the job.

Nonetheless, industry pundits have reacted in different ways to her nomination. While many support her with no reservations, others are genuinely worried that she has represented many large technology companies for the last two decades, companies very active through their lobbyists at diluting patent rights. Assuming she is confirmed, only time will tell how this plays out. But what is clear is that as a result of a recent decision from the Supreme Court in Arthrex as well as under the proposed bills above, the next USPTO sheriff in town will carry a very big gun.