The Weaponization of Congress 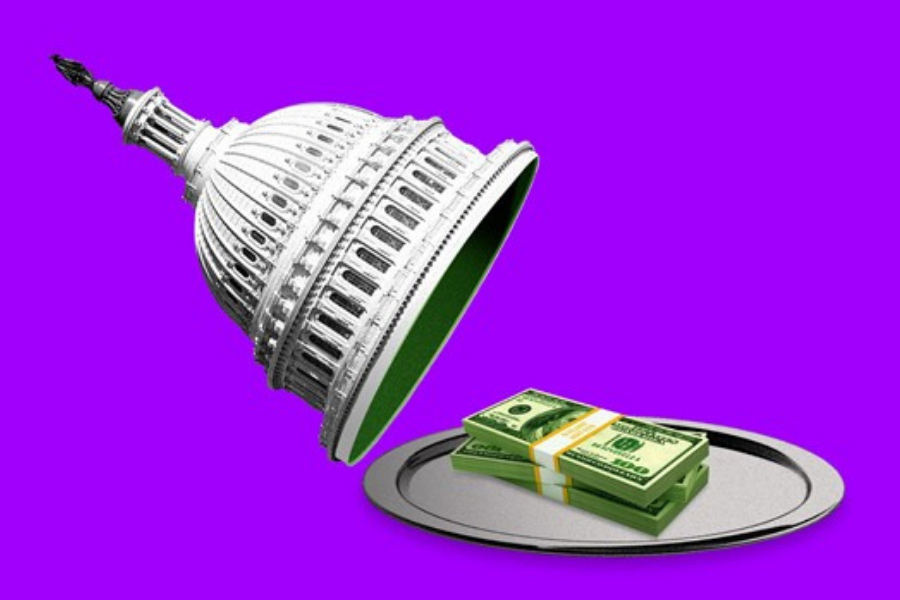 We’ve witnessed an increasingly worrisome phenomenon in the US; interest groups are literally weaponizing Congress to advance their agenda in the usually non-controversial patent area (we knew of course this was happening in other areas). In the remaining few weeks of a USPTO without a more permanent leader, both parties are jockeying to take advantage of the relative vacuum in place, as the recently nominated Kathi Vidal will soon complete the confirmation process with the Senate. Meanwhile, oft forgotten, but faithful barometers of the IP marketplace, some PIPCOs (Publicly Traded IP Companies) are showing stellar returns for the first time in too long. What does this all tell us? We dive into this topic below.

Our team will be attending the upcoming IP Business Conference (IPBC) Global 2021 hosted in our hometown of Seattle this year. Seattle in November, hmm… not our prettiest season, but at least we know no one is coming here to enjoy the weather… Since this will be the very first live event for most of the participants, I am sure there will be some early jitters and COVID etiquette questions as we start shaking hands. But it will be great to finally see friends and colleagues and, on behalf of our host city, welcome to all!

Since our last announcement a few weeks ago regarding several licenses we brokered on a portfolio originating from Xerox, we also closed no fewer than 4 new licenses on another client’s cloud computing portfolio. See the full release here. We have several other transactions in various stages of closing and should have a few more announcements to make before year end.

Finally, I am very honored to have been named this year again – and for the 10th consecutive year – as one of the World’s Leading IP Strategist. This nomination, being based on peer recommendations, means a lot to me and I am grateful for this continued support and recognition by the IP community.

Finally, we also have a buyer with interest in wireless charging assets as those relate to phones/tablets/laptops.

The Weaponization of Congress

Anyone who’s followed the tribulations affecting the patent system during the last decade – or politics in general – harbors no delusion that once elected, our representatives will focus on what’s best for the constituents who sent them to Washington in the first place. Instead, when they land in D.C., they are greeted by an army of lobbyists and special interest groups vying for their limited attention and flush with cash donations.

But recently this parroting of special interests has risen to perhaps unprecedented levels. Elected senators – on both sides of the political spectrum – are now doing a hatchet job, personally attacking a member of the judiciary, one of the very few judges in the country who was a seasoned patent attorney before his appointment and one that actually welcomes patent cases to his court. His cardinal sin? In short, his apparent eagerness to hear such patent cases and his efficient docket management. Wow! OR… perhaps a better description is that defendants feel his torrid pace does not leave enough time for them to dig into their bag of tricks (e.g. IPRs, 101 motions, venue transfers) so easily accessible in other districts.

On November 2, Senators Leahy and Tillis from the Senate Judiciary Committee (who oversees IP matters) sent a rather muscular letter to Chief Justice Roberts “expressing their concerns” about Judge Alan Albright of the Western District of Texas, who was appointed by then President Trump. Their main beef is that Albright takes too many patent cases and moves too fast. Normally, one would expect this to be lauded, for a large portion of the judiciary hates patent cases and may sit on preliminary motions for months at a time. I can personally attest to this behavior as two of our former clients waited almost a year while the judge pondered the merits of a preliminary 101 motion. As a result, their case sat on hold for a year and in the end, their patents were declared invalid under “Alice” … The inventors never really had their day in court.

What is particularly ironic is that the same companies who do not want to be brought into the Western District of Texas when they are the defendants make the same district their own venue of choice when they are the ones asserting their own patents against others… See the table below that RPX just released showing that operating companies and NPEs alike file in judge Albright’s court at about the same rate (24% vs. 26%). 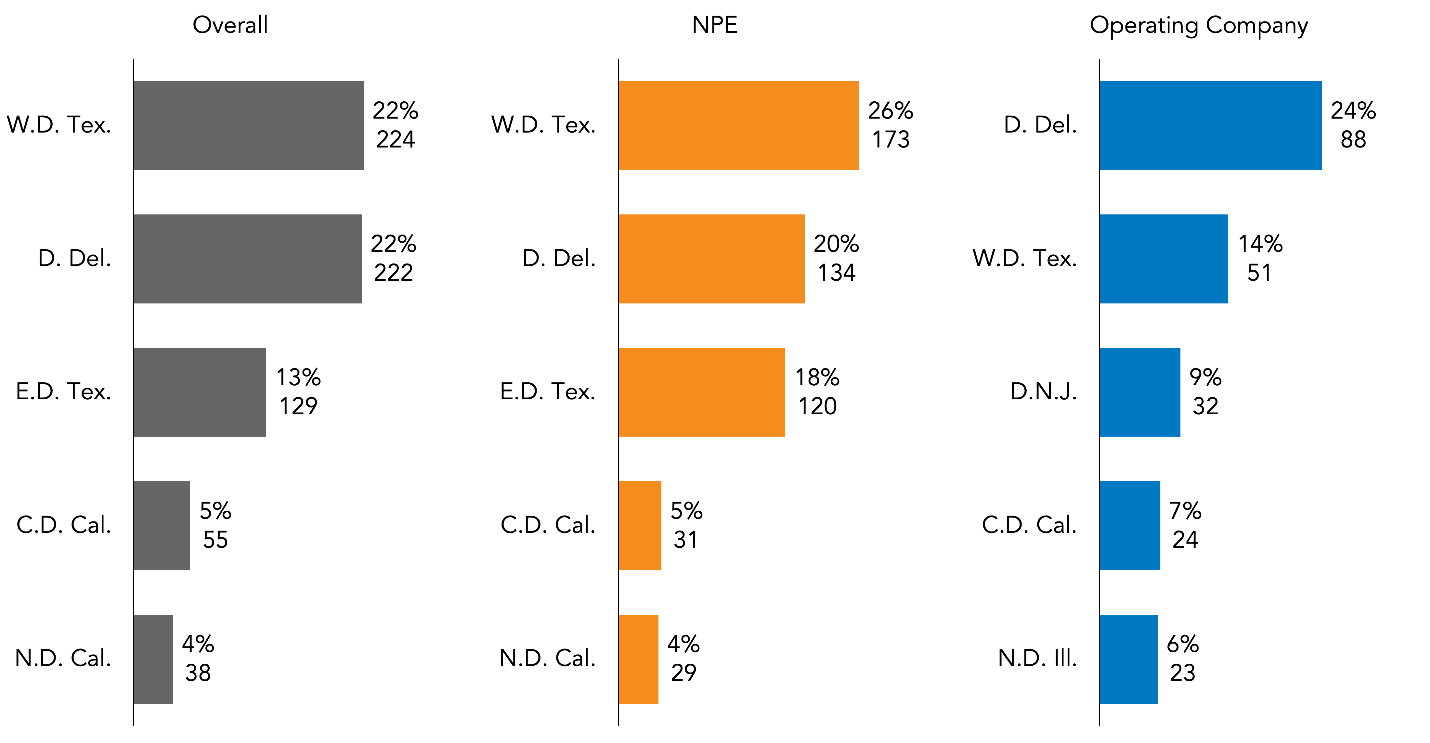 Let’s face it, Texas has always been a venue of choice for patent cases since Judge Gilstrap in the neighboring Eastern District of Texas created his famous “rocket docket” in the 1990’s where you could file a suit and have a trial within a year. I remember from my days at Microsoft when 90% or more of all patent cases in the courts were filed in that district (mostly by NPEs). It even created a housing bubble in Longview, TX as many lawyers moved there to be part of the local bar. Changes in the law forcing the disjoinder of cases against multiple parties and, more recently, the T.C. Heartland decision from the Supreme Court, made that a lot more difficult. Nevertheless, as of today, both Texas districts hear a decent percentage of patent cases (and so does Delaware) and have made this an efficient process that other districts should instead envy and try to emulate.

But Congress does not always agree with efficiency when it hurts their main contributors, and we can clearly see the hand of the “efficient infringement” lobby behind this undue pressure to what should remain an independent judiciary. This has clearly gone overboard. One doesn’t need to look far to see that the messaging for Judge Albright’s court has even permeated the Federal Circuit which, more often than not, will take cases away from him and send them in districts where defendants have the homefield advantage. Who can say “Gerrymandering the court system”?

A few weeks ago, I commented on two new Bills being introduced in Congress by the same duo of the above Senators, which clearly clearly favored the same interest groups, namely the Pride in Patent Ownership Act and the Restoring America Invents Act. This week, the Congressman Thomas Massie responded with his own bill “Restoring America’s Leadership in Innovation Act of 2021” (RALIA), which essentially attempts to reverse several changes to patent law that arose from Supreme Court rulings and the enactment of the Leahy-Smith “America Invents Act.” This one is clearly the work of the “Save the US Inventors” lobby, whose paltry budget apparently only gets them access to one lone member of the house… This Bill will join a dozen others in Neverland, just as the two that were introduced last month. One wonders why politicians still spend all this energy (or do they?) drafting bills that are dead on arrival, instead of simply issuing a press release about the bill they would have liked to pass…

Are PIPCOs Back in Fashion?

There are so few of them left nowadays that they have almost disappeared from our vocabulary. Not so many years ago, there was even an investment index at the stock exchange that tracked most PIPCOs. Nowadays, we can count them on one hand, and the main ones are Acacia Research, InterDigital, Wi-Lan (division of Quarterhill) and a few others that even fewer people know. Revenues in the patent business tend to be very lumpy; you win a case, they look great. You lose one, they suck. But these larger outfits offer a more reliable reflection of the market. While Acacia will only release their Q3 results on November 15, InterDigital announced theirs a few days ago and they were pretty solid. Total revenues were $143.5 million, an increase of 64% from $87.5 million in the third quarter 2020. The company expects fourth quarter revenues to be slightly lower, but still with a healthy net profit at the end.

The reason I mention this is that as PIPCOS go, the IP market usually goes. These are companies that have a mix of licensing and assertion-based (when people do not want to take a license, which is often) monetization activities. They have enough volume so that results are not predicated only on one deal or case that went either north or south. We should pay attention to these results and see if the other large players in the group will reflect a similar upward trend when they release theirs.