The Blooming Phase of Patents 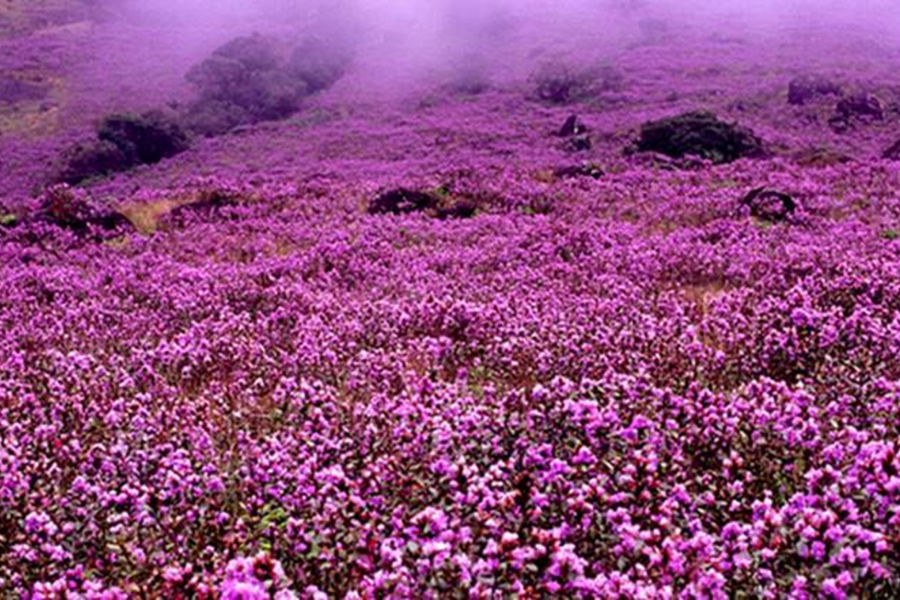 What do the Neelakurinji flower and a patent have in common? Read below to find out but, spoiler alert, it has to do with blooming…

Let’s start with the latest development; earlier this week saw the USPTO director nominee Kathi Vidal appear in the US Senate to answer questions from members of the Judiciary Committee. Unfortunately, her testimony was combined with that of another judge with a more controversial track record; so her questioning was rather light, which is a missed opportunity given how important and impactful this position is. Nonetheless, she was asked about the current patent eligibility mess (aka Alice) and her response was that “we can work together to build an intellectual property system that is more predictable, reliable and transparent”. Those are nice things to say, but predictability is in the eye of the beholder, and I am sure that serial infringers also wish the patent system was predictable enough so that they would know in advance that every single patent would be invalidated if asserted against them. So, to me, these guarded statements by candidate Vidal bring very little comfort, as they can easily be read to appease opposite sides at the same time, regardless of their respective agendas.

Mrs. Vidal also said that there needed to be “more clarity when it comes to patent eligibility,” whether it “comes via legislation or whether the Supreme Court takes a case.” The way I read this, she sees the 101 issue as being a problem others need to solve, when we all know that both the Supreme Court and Congress have had numerous opportunities to address this and dropped the ball every single time (SCOTUS will have yet another chance to pick up the pieces soon should it want to.) At least her predecessor Andrei Iancu did take the initiative of implementing guidelines that attempted to bring some clarity to the issue. It is a shame that the courts decided not to go along…

In response to a question from Sen Tillis (R) that the PTAB largely remains a “patent death squad,” once again Mrs. Vidal kept a neutral stance. She noted her experience on “both sides” of PTAB proceedings and said she would consult with stakeholders and investigate potential reforms. But she seemed to agree with Leahy and Tillis that the PTAB should institute reviews even when it interferes with a first-filed case in an Article III court, which should be a cause for concern for inventors. According to the US Inventors nonprofit organization, “Vidal’s clients have filed a combined 2,381 challenges at the PTAB. She has been paid millions of dollars by Apple, Samsung, Microsoft, Cisco, Micron, Netflix, Dell, Roku, and HP. She is attorney-of-record in 14 pending cases at the PTAB, all on behalf of the infringer/petitioner.”

While I can appreciate the fact that candidates at these hearings are trying to cast an impartial tone and not tip their hand too early, many of us would have expected a bit more support for strong patent rights. Therefore, and despite her otherwise exceptional track record as a patent lawyer, we remain a little apprehensive at this stage of what may happen at the PTO for inventors and patent owners alike if she is confirmed as the new director. Let us hope that time proves me wrong.

As usual, as I focus on the macro picture in this newsletter, I want to remind everyone that we track everything that is going on in this world and for those who need their regular dose of news, once again you can follow me on either LinkedIn or Twitter where I post almost daily about some of the most newsworthy events. I also want to remind our readers that this column is syndicated regularly in the Inventors Digest, a great source of information to innovators across the country.

Our team attended the first IP Business Conference (IPBC) Global in over two years, which took place in our hometown of Seattle a couple of weeks ago. About 400 people participated and it was great to finally see colleagues and old friends “in person” and catch up on both personal and professional fronts. Zoom calls are great, but this was a clear reminder that building a personal relationship first is still the key to most productive business transactions.

In this regard, Erika Warner (our VP Brokerage) and I are now setting our sights on the Big Apple and we will be attending the 8th annual edition of IP Dealmakers Forum from December 6 to 8, another excellent conference organized by our good friend Wendy Chou who does a fantastic job year after year putting on a great event with very relevant content. If anyone is planning to attend and would like to set some time aside to meet with us, please let us know as soon as possible.

Speaking of dealmaking, we are very pleased to announce that we have just closed the sale of a patent portfolio belonging to our client Honeywell (Smart Building division) and we will make a more formal announcement shortly. We also have a few more sales in closing that should be announced in the next month. No doubt that December should remain very busy ‘till the end!

Last but not least, and in order to support our fast growing IP advisory practice, we have the pleasure of welcoming several distinguished experts to our world class technical team, with the addition- to an already impressive roster -of veterans Mark Guetlich (formerly at Microsoft, SAP USPTO, etc.), Steve Pomraning (formerly at Intellectual Ventures, Interdigital, IP Value, Honeywell, etc.) and Ron Traficante (formerly at Intellectual Ventures, Adaptix, Qualcomm etc.). This will allow us to tackle more complex engagements for our most sophisticated clientele while maintaining a “startup” mindset towards our fee structure.

We have numerous buyers interested in reviewing patents in the following sectors:

Finally, we also have a buyer with interest in wireless charging assets as those relate to phones/tablets/laptops

The Blooming Phase of Patents

Let’s circle back to that Neelakurinji flower. If you made it all the way here, you deserve to know. Strobilanthes kunthiana, known as Kurinji or Neelakurinji in Malayalam & Tamil, is a shrub that is found in the shola forests of the Western Ghats in Kerala, Karnataka and Tamil Nadu. Its main particularity is that it blossoms only once every 12 years. Which brings us back to patents…

Because of our market presence and track record, we receive several new portfolios every single day that their owners ask us to broker. After reviewing each of those carefully, we will select only very few at the end that we believe stand a chance to be monetized in this current market. Besides the usual attributes that we consider for patent brokerage (you can review those here), one aspect that strikes me regularly is that most patents only have a small window of opportunity in their 20 years term where they are truly valuable, i.e. when they are in full bloom…  A little bit like with expensive wine, timing is everything and you can end up opening a bottle of your previous nectar too early, before it has had time to develop, or too late when it is past its prime.

By definition, a patent describes something that is new and ahead of where the industry normally sits. If the inventor productizes her invention, this usually confers her a time to market advantage during which period she enjoys that perennial exclusivity granted by the government. These cases are extremely rare in reality. Most inventions are never commercialized by their original owners and for all kind of good reasons; lack of funding, no interest, no entrepreneurial skills, etc. Similarly, it has become increasingly difficult to license a recently issued patent to an operator who will then commercialize it and pay the inventor a per unit or annual royalty payment. While large companies have become extremely agile at integrating technologies from left and right, they are not so great at compensating the innovators behind those. Moreover, it generally takes several years for inventions to mature and become mainstream. This is why, based on our experience and having tracked hundreds of transactions, we observed that the sweet spot for patents to be transacted during their 20 year lifespan is usually between year 12 and 17 (which ironically is the same period many of us could have sold our own teenage kids for not much… 😉).

Now why is that? Actually, it is very simple. It takes about a decade for many good inventions to be copied and commercialized by third parties (unless the inventor has done its own commercialization, in which case this window might be shorter). Since patents transacted on the secondary market sell primarily for their assertion value, i.e., the right to force unlicensed infringers to pay a license fee to the owner, there is really no value to the patents until they do so. Add to this a couple of years to see some reasonable sales numbers so that one is looking at a sizable pool of accrued damages, and you start to see the blooming evolve… A patent that is too “young” is also easier prey to invalidity claims, because you are looking at a greater body of prior art that could make it non-novel or simply obvious. So, the earlier the priority date, the better in a sense, all other things being equal.

But beware; while the blooming phase will last for a few years, it is not eternal. Once you reach a point where there are fewer than 3 years remaining in a patent family before expiration, you also start losing some potential buyers for your assets. Again, the reason is very simple; many buyers, especially operating companies, take a buy and hold attitude when they acquire patents as they are doing so primarily for defensive purposes, i.e., not to initiate an assertion, but to defend themselves in case a competitor does. Obviously, there is little rationale in this case to buying an asset that is about to expire. Others also want to ensure several years during which they can recoup their investment by trading the patents via various patent cross licenses (PCL) with their competitors and hopefully maintain a relative patent peace in the industry. Again, you cannot do that with patents that are about to lapse.

People will argue that even expired patents have value, as the owner can still go back up to 6 years (in the US at least) to recoup past damages. While this is true in theory, there are a few caveats; first, it still takes most operating companies out of the buyers’ pool for the reasons I just mentioned. This in turn, negatively impacts demand. Second, claiming past damages is easier said than done, and many conditions (like marking, or putting infringers on notice) need to be present to make the patent owner eligible to such past damages. Unfortunately, this is often not the case. As a result, most patents that are set to expire within a few years, although they may in theory be in their prime, are somehow corked by the passage of time and may not yield the return their owners expect once ready to transact.

The key is for patent owners to be like the precious Neelakurinji flower reaching its apex. Timing is everything. But do the math; unlike the flower which can bloom again 12 years later, there is no second chance for patents that last only 20 years!