And Then, There Was One 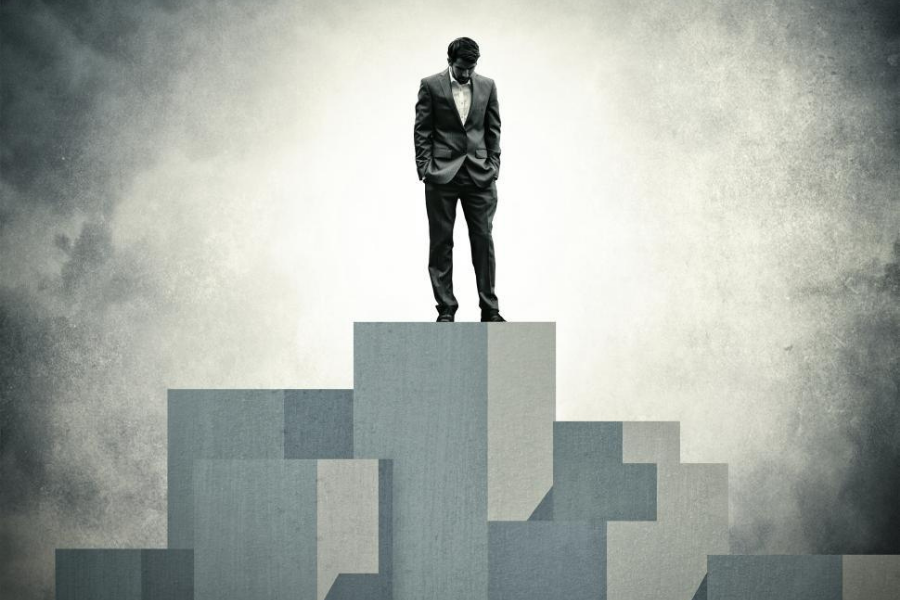 A belated Happy Lunar New Year, Valentines Day, Presidents Day or Mardi Gras, depending on when and where you are reading this!

We are rapidly approaching a full year of pandemic routine – and let’s be honest, most of us are well past the pandemic fatigue stage.  Yet, these many holidays around the world continuously test our resolve and offer a sober reminder that the natural temptation to gather for these special festivities remains a huge risk factor despite the progress being made – albeit very unevenly – in vaccination delivery around the globe. Sadly, we remain in a race to the finish against a virus that has been honing its skills, gaining strength over time. Let’s continue to stay vigilant and be smart so that hopefully we can be together once again.

Speaking of vaccine deployment,  you may remember there were numerous doomsday prophets warning that the pharmaceutical companies developing these vaccines would hide behind patent laws to limit availability to the masses. However, the hiccups we have witnessed have been mostly around production ramp up and the decentralized nature of distribution (and eligibility factors) that has been badly planned by numerous governments. But IP rights have not been a reason why someone may not receive their dose, at least not for now. Plus, there are enough individual vaccines approved thus far to avoid any kind of monopolistic tactic, should anyone be tempted to try. At the same time, and precisely because of the presence of patent rights, various governments around the world bought doses at a price that justified the massive R&D efforts required in the first place without any guarantee of success. This was a shared risk and it is normal that some of the rewards will be shared with the risk takers at the end.

In Tangible IP news, we recently closed on the sale of a subset of a portfolio owned by Siemens that we have exclusively under brokerage. The remaining assets, with wide EoU, remain available. This portfolio is particularly relevant to mobile communications, Cloud Computing – IoT and Navigation technologies. Contact info@tangibleip.biz if you would like more information about this great set of patents. We are also closing on the sale of a semiconductor portfolio and we will make a formal announcement later on.

As we indicated in our last issue, we have started to let our readers know the areas where we have buyers willing and ready to acquire patents. Our VP Brokerage, Erika Warner is the point of contact for those. You can also reach her at info@tangibleip.biz. As a reminder from our last installment (or in case you missed it), we have strong interest from buyers in the following technology areas:

While You Were Sleeping…

There were several interesting developments in the past few weeks on the IP front. At the international level, we are seeing efforts in Europe to clarify rules of engagement around Standard Essential Patents (SEP) in order to bring some predictability within the process.  In China, we witnessed an enormous uptick in new patents filed locally by Chinese nationals – often times of dubious quality – because of generous subsidies to do so, the Government has finally announced that it will put an end to those by 2025.

In the UK, it would appear that Brexit will not mean leaving the European Patent Office while in the US, we are still awaiting word of who will be the successor of USPTO commissioner Andrei Iancu. In parallel, the battle for clarity around patent eligibility (101) continues to rage, with more parties filing amicus curiae briefs with the US Supreme Court in the American Axle & Manufacturing case. So far, SCOTUS has had close to 20 opportunities to help guide the lower courts with how to handle its previous Alice decision and yet it has refused to do so. I for one, am not holding my breath, but I am more than willing to be pleasantly surprised with a group of new judges who were not part of the initial decision and may want to make a name for themselves. But until then, we are still in a kill zone and the Federal Circuit has recently reiterated that it does not wish to follow the guidelines set by the USPTO around 101, leaving inventors to rely on one approach to obtain a patent, and a different one maintain the very same patent in force. Just to be very clear, this is complete NONSENSE!

Meanwhile, two well-known South Korean companies are embroiled in a fight right here in the US over trade secret theft and the International Trade Commission just decided that SK Innovation stole trade secrets from rival LG Energy Solution. An exclusion order from the ITC (the rough equivalent of an injunction) could jeopardize a new electric battery plant in Georgia that the new Biden administration was counting on.

The ITC is indeed a powerful tool when it comes to enforcing IP rights and the most active NPE in the US, IP Edge who files dozens of new cases in courts each month, has shown that it is moving to higher stakes litigation, recently filing its very first case before the ITC around a set of wireless patents. With this new approach, IP Edge sends a clear message that it is a force to be reckoned with and will seek much higher licensing fees from defendants onward, whom it traditionally sued in district courts where injunctions are virtually nonexistent.

And Then, There Was One

We have commented recently on the fact that NPEs, always the canary in the coal mine regarding the health of the patent market, had increased their activities significantly. “Activity” in this scenario generally means filing more cases in court, as we still live in a world unfortunately where an infringer has no real incentive to come to the table and negotiate a reasonable license. In the current version of the playbook, an infringer must first try every trick at its disposal, all generously endowed by our legal system. But let’s look at the numbers; defensive aggregator RPX recently published a well researched article on this very subject (for which we were interviewed by IAM Magazine), showing historic trends of patent court filings by both NPEs and operating companies over the past 15 years. The verdict is that yes, NPEs are filing more cases, but only recently have we seen an uptick in new cases while cases by opcos have remained flat. And needless to say, we are still a far cry from the summits reached before IPRs (via the AIA) and Alice started their carnage. (The first horizontal line represents 2000 cases filed any given year, the second line 4000, etc.) 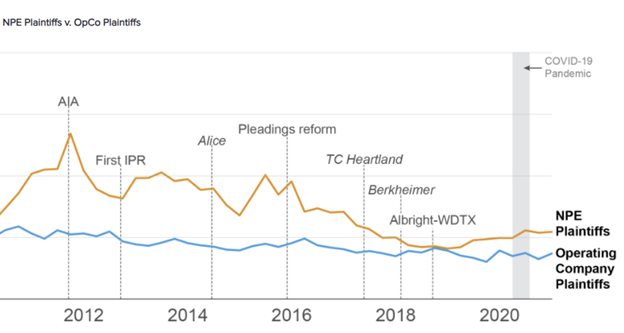 One can make the case from this graph that NPEs got their mojo back when justice Albright was named in the Western District of Texas last year and decided that he wanted his court to hear more patent cases. He then set some procedural rules that made it much more difficult for defendants to change venue (it helps that most defendants have a business presence in his district in Austin, while very few did in Longview in neighboring Eastern District where 90% of new NPE cases used to be filed before TC Heartland made venue shopping much more difficult). Albright also set a rapid case docket that moved faster than IPR challenges (thus making PTAB challenges largely moot) and pushed most 101 arguments to be heard at trial instead of through early dispositive motions.

In a sense, it is very encouraging for patent owners to see that a single judge sitting in Texas can have such a direct impact to help -in their view- even the playing field. At the same time, it is very scary that such progress must rely so heavily on one individual who set to push a different agenda, just as it has been sometimes painful these past years watching Director Iancu try to steer the ship in a different direction by his objurgations and sheer perseverance against the interests of a very well entrenched group.

If we have learned one thing recently with federal politics, it is that whomever is newly appointed to the job can rapidly undo the work of his/her predecessor with the strike of the pen. In our case, this kind of new balance in some US courts, although much needed and welcome to give inventors a fair shake against infringers, remains on very fragile grounds. A more permanent solution, coming from both Congress (which has no shortage of Bills to vote on) and SCOTUS (to put an end to the 101 morass it has created) will be required to bring some long-term stability and predictability in a system that alas too many have come to distrust.