Two New Canaries in the Coal Mine? 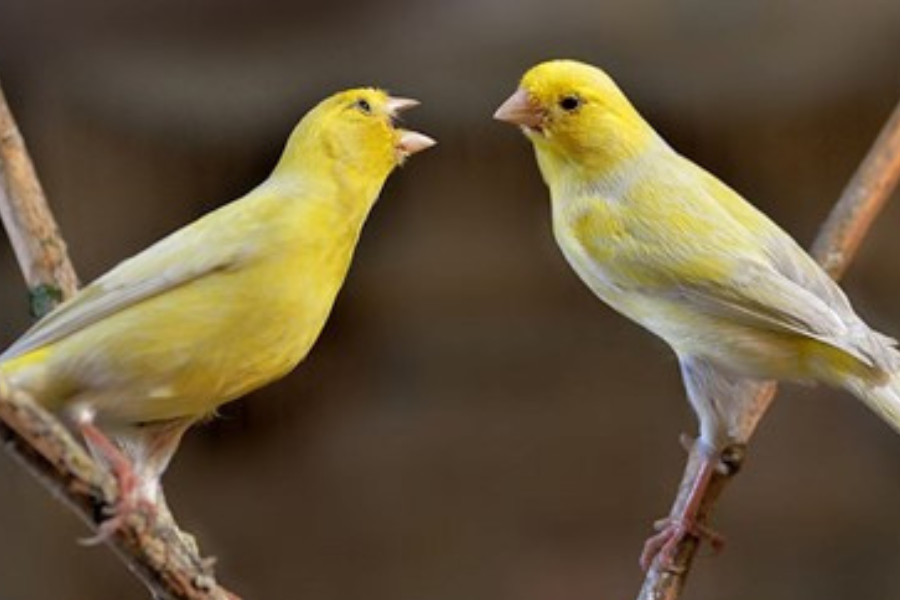 I often comment on the dichotomy between retail and wholesale patent licensing. The former is the realm of small inventors and SMEs while the latter is the specialty of large patent owners who monetize hundreds if not thousands of patents at once. Over the last decade, inventors have been handed a raw deal with a system largely favoring challengers and infringers alike; conversely, large licensing powerhouses have continued to thrive. However, change may be on the horizon, which I’ll discuss below.  We will also see how recent patent awards – a key indicator in tracking market trends – have evolved in Q3 and how the most frequently sued company for patent infringement handles being the plaintiff for a rare change. Finally, I just penned an article for IAM Magazine about the Blackberry patent portfolio sale debacle (as it currently stands), which will be available this weekend (behind firewall).

After speaking at the latest IP Watchdog conference last month, we are already preparing for our team to participate at the next edition of IP Dealmakers in early December in NYC. I’ll report more on the event in due time. If you’d like to meet our team, please shoot me an email so that we can start planning meetings ahead of time as the event schedule is already pretty full.

We will soon formally announce the successful brokering of a small portfolio in the Quality Control/Assurance area with numerous companies taking a voluntary license pursuant to our signature PRELIT™ Licensing Program. No threats needed; no lawyers involved. Just sound business sense!

In terms of new assets for sale, we will soon make available to the market a great portfolio in the DRM space, with very high relevance to several industries. This one will be available in just a few short weeks. We also have the following portfolios for sale:

For more details, please email us at info@tangibleip.biz.

Similarly, if you’d like to be added on our distribution list in the future so that you are the first to receive new opportunities, please email us at info@tangibleip.biz.

For a short window this year, we are entertaining new prospective portfolios across a variety of sectors. You can review our criteria here but if you own a patent portfolio with at least two issued US patents and have knowledge of others using your technology (infringement), we are happy to review for potential brokerage. We will also look at larger portfolios where evidence of use is uncertain.

Some of the areas of particular interest include:

Please reach out to Erika Warner with any assets that may match this request at erika@tangibleip.biz. We will treat each query as confidential.

When Even Wholesale Licensing Takes a Hit

In most arenas, all players are rarely created equal. For instance, an environment that stifles the little guy might favor large behemoths who can throw unlimited resources at a problem and have the capability to play the long game. Life is rarely fair as we all know!

Patent licensing has historically followed that rule and while small inventors and patent owners have royally struggled to enforce their rights in the last decade, Fortune 500 companies who sit on massive patent war chests have had no problem getting deals done. These deals include global cross patent licensing agreements with other large patent holders, and more traditionally monetizing their patent assets through a mix of licensing and, when necessary (which is often), assertion. Two companies that have perfected this art are undoubtedly Nokia and Ericsson, both of whom have been extremely successful year after year returning massive patent licensing profits to their organizations. It doesn’t hurt that they each own tens of thousands of patents, including thousands of standard essential patents (SEPs).

However, there may be some red flags that bode for rougher seas ahead, as both European companies recently reported declining revenues resulting primarily from licensees to their SEP patents dragging their feet to renew existing agreements. In Nokia’s case, under the new leadership of Alvin Patel, and despite more diversification on its patent licensing activities outside of the traditional  telecom area, the company still announced that its IP licensing revenues had fallen by almost 20% year over year while net profits were also significantly lower and operating margins had declined from 78% to 68%. These results spooked both investors and analysts and Nokia’s stock immediately fell by almost 10% overnight.

One could peg this decline as isolated and specific to Nokia’s business. However, Ericsson also reported the very same day, and its results offer some striking parallels to its Finnish cousin. The Swedish company reported a year-on-year fall in IP licensing revenues of almost 40% (from 2.7 billion SEK to 1.6 billion SEK (roughly USD $100 million). These results played a large part in reducing the company’s overall gross profit margin from 44% in Q3 2021 to 41.4% over the past three months. Similarly, the market punished those results immediately and the stock was down over 15% overnight.

We are not talking about small stocks that frequently fluctuate widely overnight here. This is a hard delivered message from investors that they do not appreciate this trend. This begs the question of who is to blame? As we all know, licensing of IP in the global ecosystem only works if players are rational and pay their fair share for using technologies and innovations that do not belong to them. In these two cases, the main culprit is the non-renewal of existing licenses within an appropriate window. To be clear, we are not talking about some new technology that they are trying to force people/companies to adopt. On the contrary, licensees have already agreed that these licenses were legitimate by entering into an agreement in the first place. But something has changed as previous licensees now feel so emboldened by the current legal environment that they are starting to freeride in order to increase pressure on these publicly traded companies and gain leverage for a better deal later.

This is both unethical and dangerous, as we can only imagine what happens when everyone feels everything is theirs for the taking with no thought to the implications. This is how innovation ends, as the incentive to do so is eliminated. This is also how democracies unravel over time, as we have seen time and time again. Let’s hope this one will later be filed as a rare case of strange coincidence. In the meantime, the question remains; are Nokia and Ericsson the two new giant canaries in the perennial coalmine and their disappointing results a harbinger of things to come?

Apple Goes on the Offensive

Ever since its historic patent battle against Samsung over the iPhone a few years ago, Apple has rarely filed lawsuits over the infringement of its own patents, as it sits most of the time on the receiving end of other’s complaints. According to the RPX database, it has been sued 765 times historically and was the plaintiff in less than 70 cases. It currently has only 4 patent related cases open where it is the plaintiff and all but one are for patent infringement (the others are all motions for declaratory judgment of non-infringement – aka DJs). So, to see the Cupertino giant accuse a young startup of infringing its patents is both surprising and, well, a bit ironic. Upon closer scrutiny though, the case against Masimo Corp filed in Delaware appears to be direct retaliation against Masimo’s own previous filing of a complaint against Apple before the International Trade Commission (ITC). Apple claims that Masimo used the ITC proceedings to gain access to confidential information about the Apple watch which it then copied. Masimo has also filed its own patent infringement lawsuit against Apple in 2020. All cases are still ongoing. Now that the tables are turned, it will be quite interesting to see how Apple fares in a very harsh environment it helped create over the years, replete with IPRs, re-exams, request to change venues, summary motions based on Alice, appeals, etc., a game it has itself perfected to an art.

Who Wants to Fix Alice? Everyone it Seems…

Up until very recently the right answer could be summed as follows: all of those who could did not,  and none of those who could wanted to. I commented recently how Congress and – surprise, surprise – the US Supreme Court are suddenly now interested in the Alice issue after ignoring it for years. What has passed fairly unnoticed though are the efforts that the USPTO has made in the past year to clarify its guidelines on patent eligibility. This initiative started under former director Iancu and is being pursued under the tenure of his successor Cathy Vidal. Remember that there is currently a guidance to examiners and applicants alike that has greatly improved predictability and consistency of results under section 101 and, as a result, fewer patents are being rejected because of lack of eligible subject matter. However, many are still quite critical of the current guidance since it remains inconsistent with that of the Courts and thus leads to strange results where one’s patent may overcome 101 rejections at the USPTO level, just to see the courts invalidate the same patent later on based on the very same grounds. While this may be good for the patent office, whose main source of revenues are issuance and maintenance fees, it is certainly not doing inventors any favors. So, our own guidance to patent applicants is generally to make sure their patents are drafted, not only to overcome the typical and now less stringent 101 guidance issued by the USPTO, but to also make sure it is consistent – if that is even possible – with the current caselaw – until both are reconciled once and for all.

Who is Still Cashing In?

Despite all the setbacks that patentees have endured recently trying to enforce their rights, some are still managing to win their battles and cash in on their innovations. But at what price? See the table below for the patent awards granted by the courts in Q3 2022. One must also bear in mind that even for the few larger awards listed, many of those will likely be overturned or substantially reduced through the appeal process. And also remember that for each award below, there are dozens of cases that were lost at some stage of a litigation, very often without the patentee even having its day in court. Nonetheless, they remain a key indicator of the health of a market and here they are. 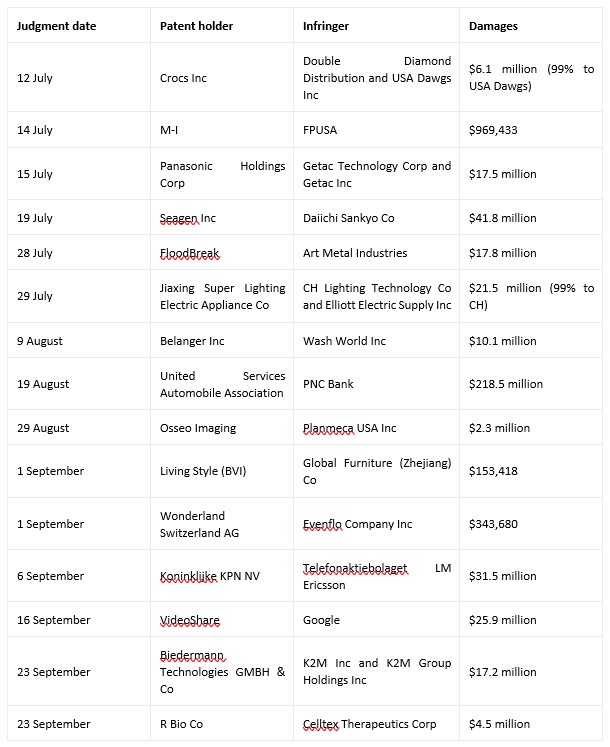