Yes, Some Patents Can Be Worth $2 Billion (Even if Many More are Worthless)

If you recall in our last two columns, I postulated that a couple of recent phenomena were poised to positively impact patent valuations, namely a new policy at the PTAB to not institute cases that are already underway in a parallel district court litigation, and a very favorable strings of events for Standard Essential Patent (SEPs) owners in the UK and in the US alike.

This week, we focus on a third event of significant proportion which should further pursue this trend. More on this below.

In Tangible IP news, we officially announced the closing of 5 voluntary licenses with a patent portfolio pertaining to AR/VR technology, which we still have under brokerage. We also just completed the sale of another portfolio pertaining to vehicle to vehicle communication technology. A separate announcement will follow shortly. Finally, we have a handful of other portfolios in various stages of closing.

Again, as I am focused on the macro picture in this newsletter, I want to remind everyone that we track everything that is going on in this world and for those who need their regular dose of news, once again you can follow me on either LinkedIn or Twitter where I post almost daily about some of the most newsworthy events.

I regularly remind our readers of the 5 main factors that drive the IP market, namely:

Of all 5, the last one may have lost some of its steam over time as there are too few publicly traded IP companies (PIPCOs) left to provide reliable data (most NPEs are operating as private companies) and their stock does not track the market as well as we’d like to see. On the other hand, a new phenomenon has emerged.  Massive amounts of cash are now available to patent owners for asserting their assets, or what we refer to as litigation-based funding. This factor is probably on par now with the general health of the public NPEs as a good barometer of where the market is going. It is actually a better indicator than the one it is replacing, as it reflects the willingness for sophisticated lenders to enter into high risk investments, while the PIPCOs’ performance was always skewed by how third parties saw their financial performance. I would also note that it is common knowledge that very few analysts like the lumpy revenue model of IP centric companies.

Going back to the 5 main factors above, I want to talk today about a potentially seismic change in one of those, namely a recent massive court award in a patent case.

To put things in perspective, most victorious parties in a patent case do not receive a windfall. According to the latest PWC Patent Litigation Study which came out in 2019,  the median damages award in the most recent 4 year period for which data was available (2013-2017) was only US $6 million, and this amount increased to slightly over US $9 million once you exclude summary and default judgements. See tables below. 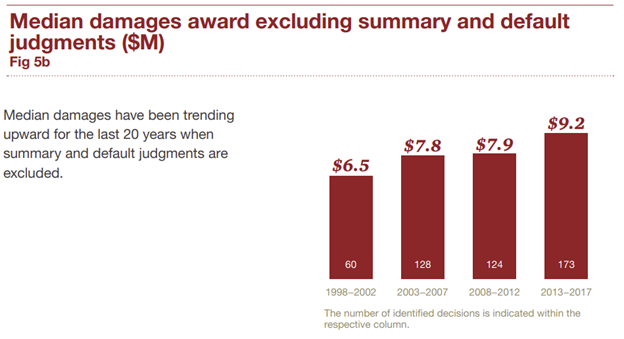 Furthermore, there were very few extraordinary awards in patent cases in the last 5 years or so, which coincides with the apex of both the Alice doctrine and the IPR challenges, both responsible for the invalidation of so many patents that were otherwise infringed. Looking at the table below and if one excludes the outlier award in 2016 of over US 2.5 billion by Idenix Pharma against Gilead for the infringement of a very important drug, the last court awards granting a patent owner $1 billion or more go back to 2012 when there were 3 of those back to back. 2012 was also the last year where patent valuations were impacted by the “Nortel bubble” resulting in an arms race to acquiring patents left and right.

However, we have seen the pendulum swinging back in the past couple of years. Since the PWC study was published, several large damages for patent cases have been awarded by the US courts, namely:

However, 2020 is when things get really interesting, with a US $1.1 billion to Caltech against Broadcom and Apple in January 2020 and, last but not least, a mega award of close to US $2 billion to Centripetal against Cisco that just came out a couple weeks ago. This latest verdict against Cisco took the IP community by surprise. The case is Centripetal Networks, Inc. v. Cisco Systems, Inc.. Apart from the judgment itself, the case is interesting because it involved a 22-day bench trial (no jury) via video.  Ironically, Cisco had objected to video conferencing — especially because the court was not using Cisco tech…

This is one of the rare cases where a judge, not a jury, granted such a high award and, while Cisco will undoubtedly appeal the case, this amount is less likely to be overturned than if it came from a jury, as juries have a tendency to overinflate damages in an effort to “punish” who they see as being the “bad guy”.

Each time a large award like this is made public and regardless of the fact that it may later be overturned or decreased through an appeal, a few things happen: C-suite executives in companies that are or may be sued for patent infringement find themselves forced to have the discussion at the board level as to how avoid such a scenario in their case. The logical answer is inevitably to mitigate those risks by taking a license to the patents at a much lower price earlier on in the process. In other words, practicing “efficient infringement” can still be a costly proposition. Second, it emboldens more patent owners to assert their own patents (with the unfortunate perception that they too will become billionaires) and encourages more litigation funding entities to gamble on more cases, since the potential upside is so high and much better than what the stock market can ever offer. The increased litigation in turn forces infringers to pick their battle and become more flexible in their willingness to move away from the “scorched earth” approach and therefore be more mindful of other people’s patents. Logically, all this leads to higher valuations for this asset class, as the alternative has now become more risky and more expensive.

We predict this latest court award will continue a trend that started less than 2 years ago pointing decisively toward higher values for very high-grade patents, although please know it won’t make mediocre patents any more valuable.